Ever wonder how the guild got it’s start?  Here is a story about the founding of the Wiltwyck Quilters’ Guild from a talk given at the 35th anniversary celebration by Hildegard Pleva, one of the founding members of the guild.

Here are also photos of the UC Bicentennial Quilt that was the reason so many local women gathered together in 1976. 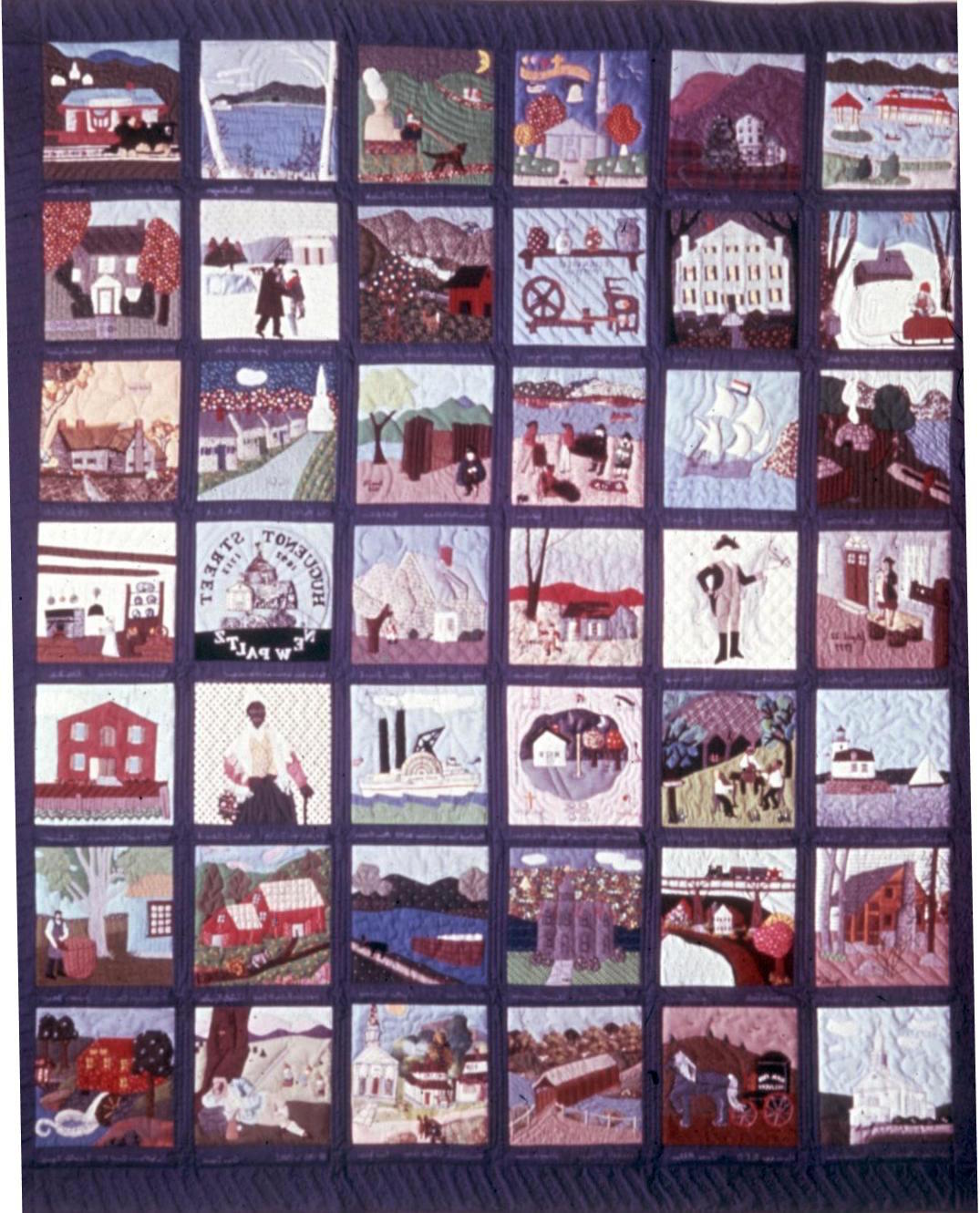 Gallery of photos of some of the blocks:

Thirty-five years ago I participated in the founding of a guild of quilters. It was born out of the effort to produce a pictorial quilt honoring the history and culture of our county in honor of the bi-centennial celebration of our country. Yesterday the Wiltwyck Quilters Guild enjoyed an anniversary luncheon meeting. It was my privilege of offer the following remarks. Over 100 women attended and a wonderful time was had by all.

In 1976, in late winter and in early spring, traditional quilting bee season, four to ten women at a time gathered around a large frame dominating the living room of the Kingston home of Ruth Culver. We marked, threaded needles, thimbled them through all three layers of the stretched quilt, buried our knots (if there were any) and we shared stories. I have been told that you would appreciate hearing the Guild story.  Much will be familiar to my peers here and I beg their forgiveness for any failure of my memory. That 1976 quilting bee, women working and creating, united in a mission to mark the bi-centennial of our country, is just part of the story.

It all began with Ruth Culver for whom quilting was not a resurrected historical craft but an art born of necessity, a skill bred in the bone and coaxed into day light by women who had gone before. Like women in the dust-filled Oklahoma mud soddies of the 19th and early 20th centuries, they made quilts so their families wouldn’t freeze and made them as beautiful as possible so they wouldn’t go mad. This sensibility was in Ruth’s Appalachian heritage DNA.

That heritage morphed into quilting courses at Ulster County Community College in the 1970s. With the coming of the nation’s bicentennial a dream was born – a county quilt presenting a pictorial history of the place and its culture. From the ranks of friends and students Ruth gathered 42 women ranging in age from 18 to 78 and invited them to an initial planning meeting on a windy February night in 1975. Each of us has our ‘how I got started with the Guild’ story. After taking a class with Ruth this meeting is where my story would begin.

After growing up in Bensonhurst, Brooklyn, I’d married and lived in Connecticut before moving to Kingston in 1974. Surrounded in childhood by garment workers, knitters and embroiderers, I’d always had a needle in my hand. But I ignored the thimble. Such a nuisance! My Aunt predicted that I would never be a real seamstress until I’d made friends with my thimble. That friendship was to be cemented by an introduction to quilting. Ruth Culver is the second person I met upon moving into our house in her uptown Kingston neighborhood The rest is history, thimble and all.

The organizational meeting that cold winter night was my first outing less than a month after a Cesarean delivery and with a nursing baby in tow. I nearly fainted after running across the windy parking lot and up the stairs of Vanderlyn hall. Collapsed in a chair and did some Lamaze breathing and was ready for business.

I do not remember precisely what was decided at that particular meeting. But I do know that we were fired up by Ruth’s enthusiasm and her ‘no obstacle too great’ attitude. We talked about eventual size, what blocks might depict, materials, timeline for production, work sessions were we would help each other solve design problems and swap fabric to get just the right tone and texture for the pictures we were going to paint with fabric. We dreamed, too, of mounting the quilt in a show incorporating other quilted pieces. All of this eventually came to pass. The nursing baby eventually played under the frame as we quilted in Ruth’s living room. There were non-stop bees composed of rotating quilters, one leaving and another taking her place before the seat had time to cool. There was not a single topic of interest to women that was not discussed around that quilting frame: children, husbands, discipline of both, parents, childhood memories, recipes, home remedies for illness, networking of every kind. Our youngest quilter, Kathy Baxter Krayewski, was only 18 and she got some education. We were teachers, artists, homemakers, nurses, business women, secretaries, waitresses, retirees, college students, young mothers and grandmothers from every ethnic, racial and religious background who became friends in the effort to create something beautiful, a tribute to our history and culture, emblematic of our pride in the bicentennial celebration of our country. The Guild has in slide form a photo of each block of the quilt. My father came with a tripod and his Rolleiflex to immortalize each block. Those slides have now been digitized. They were used in presentations made to 4th grade classes in schools throughout the country to augment local history studies during the period of the bi-centennial celebration.

The dream of a show featuring the quilt came to pass in late spring of 1976 in the art gallery of the college. We were so pumped up after that show and wanted a place to put our energies, a way in which we could maintain the bonds formed between us. We also knew that working together spurred us in creativity.

Early in the spring of 1977, to express our gratitude, the 42 bicentennial quilters presented Ruth with an album quilt at a luncheon in her honor. We all knew that we did not want it to end and discussed at table how we would proceed to create a permanent group. We know of the Embroiderer’s Guild and thought we could promote and educate others while stimulating our own creativity and skill development. In conversation various names were tossed around.  Ulster County Quilters’ Guild, Kingston Quilters’ Guild were rejected In our research for the historical blocks of the bicentennial quilt we had learned that the early Dutch name for the area was Wiltwyck (wild wood) and I suggested we us this name. Wiltwyck Quilters’ Guild has a nice ring to it. In the summer of that year Ruth, Polly Briwa, myself and one other woman whose name eludes me, met a number of times to write the organization by-laws.  We began regular meetings at the college in the fall of 1977 and elected Ruth as our first president.

A little side story is called for here. Polly Briwa was a larger than life personality, a sort of ‘Auntie Mame’ figure dedicated to her enthusiasms. She and her IMBer husband lived in a restored old stone Dutch house on Sawkill Road. She became a prolific quilter but she was also a chain smoker and died much too early. After moving to Glens Falls she became active in the guild there. Upon her death, her husband began sponsoring a cash award for the finest log cabin pattern quilt at every guild show in Glens Falls.

Looking back, it seems we worked at brake-neck speed, but we were younger then. Most of us had families and/or other day jobs, were creating fabulous quilts at home, meeting regularly as a fledgling guild formalizing its structure AND mounting our first major show in June of 1978. This last could not have been accomplished without the visionary leadership of Ruth Culver and the considerable tech support of Ulster County Community College under President Donald Katt. The college provided the venue, insurance, printing and security for a show that ran for two weeks. Since many of you, I am sure, have been involved in show presentation there is no need to list the complications but for others I must. Themes, invitational quilts, raffle quilt, judges, prizes, staffing, vendors, demonstrations and workshops were all put into place. How pleased we were to present the profits earned to the college scholarship fund.

So much for history. I cannot close without speaking of how the Guild achieved its primary purpose which is to promote the art of quilting and continue skill development in its membership and become a sorority of quilters; women with purpose and creativity . At a time when the commercial sector had not yet responded to the bicentennial boom in quilting we were inventive. Before clear grid rulers we used metal and plexi-glass scraps purchased at places like what was then P&D Surplus on the Strand in Kingston. We had our husbands cut them into measured strips. Before rotary cutters we made pattern pieces with Shrinkydink plastic stolen from our kids (smooth on one side and matte finish on the other. Kids drew on it, cut out designs and baked them in the oven until shrunk. And for the hand quilters among us we do not fail to remember when Elaine Blyth, charter member from New Paltz, reported quilting her prize winning navy blue and white patchwork beauty entirely on a lap hoop. This was the equivalent at the time of moving from a Commodore 64 computer to and Apple PC or today stepping up from a simple one purpose cell phone to an iPhone. We simply couldn’t believe it. “Are you sure you won’t have gaps and ripples?” we asked. Elaine reassured, “Just baste the hell out of it in a frame and quilt from the center out. She was right and we were liberated.”

Thank you for the part each of you has played in allowing the Guild to continue to achieve its purpose and flourish. A mark of your success is the number of members who have been admitted to the Catskill Quilters Hall of Fame over the years. Other signs are the continuing string of workshop offerings and the presentation of bi-annual shows. You are to be congratulated.

On a personal note, although I withdrew from the Guild in 2000, the education in this art form and the influence of countless creative, generous and inspiring women stayed with me. I continue to quilt and have become more adventurous in my efforts. For that I am grateful. But most of all, I am grateful for the memories, the wisdom, camaraderie, listening ears, and creative example of women. Some things about quilting never change, except that now men are sharing the wealth.

In the mid-1980s when I was inducted into the Catskill Mountain Quilters Hall of Fame, I closed my words of gratitude with this citation from the Book of Psalms. With your kind permission I will use them here:

Best wishes for your upcoming show. Thank you.